The project brief was to design new lecture hall facilities and a department building for the Business School at University of the Free State. These buildings were to cater for the growing number of students, as well as to create a new image for the Business school. 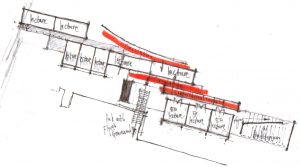 Conversation with the context

An important aim of the design process for Economic Sciences Building was to connect the existing campus. The allocated site is curved on the Western edge, running adjacent to the main circular vehicle campus route from Thakaneng Student Centre. The site is defined by a secondary vehicle route and a main pedestrian route on the eastern side. On the north, the Wynand Mouton Theatre is an important public building on campus and within the community. 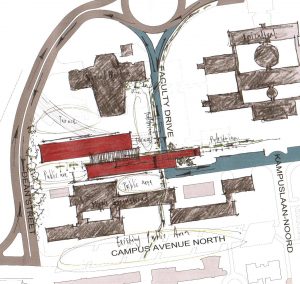 Circulation around the site

Conversation with public at large

The building forms a fragment of an urban environment, with intertwining and overlapping functions. On campus, as in all city environments, the varying public realms of pedestrian and vehicular flow, as well as public areas, are intricately linked. By extruding the two buildings over the site with open public spaces a backdrop for students to congregate are created, promoting spontaneous dialogue and flow through the building. 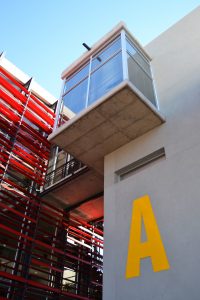